Lecture at the Royal Irish Academy in September 2019 by Prof. Thomas Cech.

In September 2019, the Royal Irish Academy on Dawson Street in Dublin hosted a lecture by Nobel Laureate, Prof. Tom Cech. This impressive Professor from the University of Colorado, Boulder, is Scientific Advisor to Seroba's portfolio company, Storm Therapeutics, so we joined the crowd that gathered at the RIA to listen to his words of wisdom. 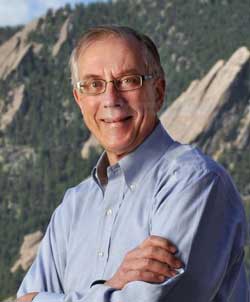 Professor Thomas Cech is an American chemist who shared the 1989 Nobel Prize in Chemistry with Sidney Altman, for their discovery of the catalytic properties of RNA. Cech discovered that RNA could itself cut strands of RNA, suggesting that life might have started as RNA. He also studied telomeres, and his lab discovered an enzyme, TERT (telomerase reverse transcriptase), which is part of the process of restoring telomeres after they are shortened during cell division.

Academy House on Dublin’s Dawson Street was built in 1756, some three years before a young Arthur Guinness opened his brewery in the city. The beautiful Georgian-style Meeting Room of the RIA is furnished with paintings and sculptures of famous 17th and 18th century mathematicians and scientists. A more suitable setting would have been difficult to find for a lecture by Distinguished Professor and Nobel Laureate, Thomas Cech.

In fact, it was the meeting point of architecture and science that Prof Cech chose as the topic for his lecture: ‘Building Labs for Interdisciplinary Science.’

Productive collisions are those serendipitous meetings whereby researchers bump into others, exchange conversation and discover some insight of benefit to their own work or activity. When those productive collisions are with academics from different disciplines, such insights can be even more important. Transdisciplinary research is an area of particular interest to the professor.

With the help of his fascinating architectural and scientific slides, Prof. Cech described the design and building of the Janelia Farm Research Campus in the Washington, D.C. area, a massive project that he oversaw when he was president of the Howard Hughes Medical Institute. The building features glass walls that allow all those working within to feel part of the whole and to interact freely with those working in other disciplines.

A similar philosophy is the basis of the approach in the University of Colorado, in Boulder, where Prof Cech regularly teaches undergraduates, carries out scientific research and directs the Biofrontiers Institute. Part of the approach in Boulder is to hire faculty who are trained in two fields, for example computer science and biology, or physics and biology; they become the nodes in a collaborative network. Next, students are trained in the same interdisciplinary way and the University emphasises strong interactions with industry – biotech and pharma.

Professor Cech points to a number of successes of this approach. Bridging computer science with biology has allowed scientists to do experiments genome-wide or even proteome-wide instead of looking at one gene or RNA or protein at a time. It’s also enabled metagenomics and new revelations about the microbiome. Bridging physics with biology has been equally transformative for biologic imaging, for example super-resolution microscopy and single-molecule biochemistry.

“I think if you want to answer a biological or biomedical question at a deep level, you want to bring together whatever talents, training, resources, equipment, theories, from wherever you can to answer the question. This has always been my way of thinking, says Prof Cech. I was trained as a chemist originally, but I never felt constrained by chemistry. We’ve done structural biology, X-ray crystallography, cryo-electron microscopy. We use whatever techniques are required to really delve into questions about how nature works.

Interdisciplinary science does rock a lot of people’s boats in a way they find to be uncomfortable, because a lot of scientists, as they get more ensconced in their topic, get narrower and narrower in their thinking. You end up being more and more of an expert in things that fewer and fewer people care about. In Boulder, we try to fight that by embracing multiple disciplines and encouraging our students to do the same.”